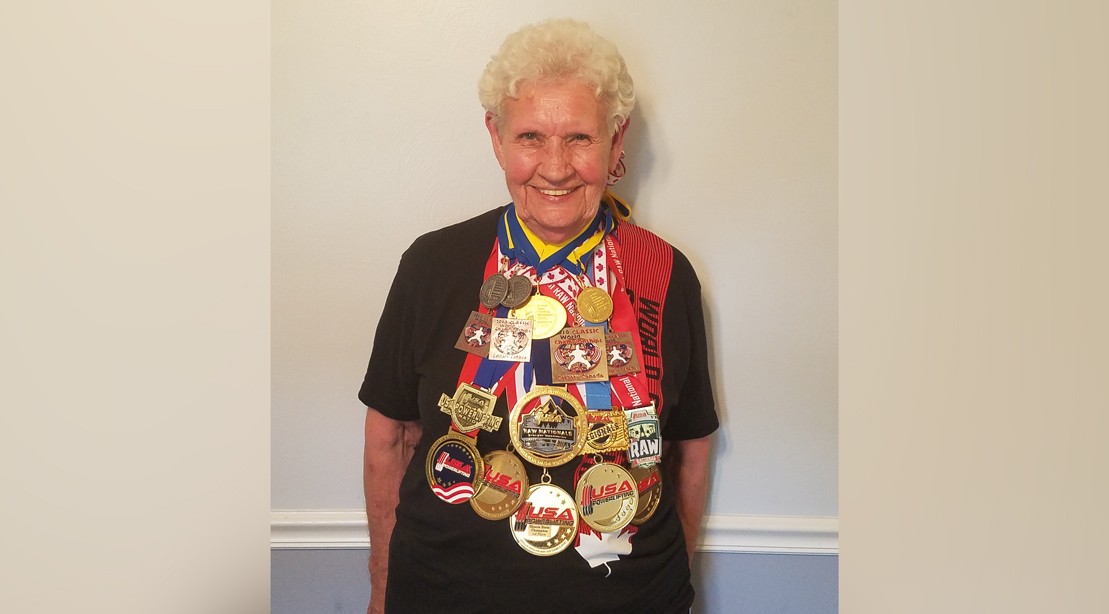 Everyone has a favorite lift, and Shirley Webb’s is the deadlift. It came naturally to Webb when she joined a gym for the first time at 77 years young, and the now-82-year-old powerlifter boasts a 265-pound PR and is the world champ in the IPF Raw Masters 4 category. To date, she’s won 18 medals, including four in national competitions and eight from the two IPF world championships she’s lifted at.

Despite her powerlifting prowess, Webb was hesitant to join a gym when her granddaughter asked her to a few years back. At that point, she could barely get up off the floor without using a chair to push herself up, and climbing the stairs was a challenge. But it wasn’t long before she’d outgrown those small goals.

“After about three weeks, my trainer had me getting up off the floor by myself,” Webb told M&F, “and now I can walk up the stairs without pulling myself up. I always hold the handrail for safety reasons at my age, but I can walk up them without holding on.”

Webb loved the feeling that she got from working out, and soon enough, it became clear that she had a knack for deadlifting. She easily hits weights that plenty of gym goers would struggle with, and in this day and age, it was only a matter of time before a video of Webb knocking out some deadlifts went viral, even ending up on ESPN.com. She couldn’t believe the reactions she got, and she’s still in awe about it.

“When I go to competitions, there’s young girls that come up to me, and want my picture made with them, and they tell me when they grow up, they want to be like me,” Webb says. “Older people and people that have never lifted weights also tell me that I am an inspiration to them. I know there have been several people that joined the gym because of me, and that makes me feel good.”

But it hasn’t all been smooth sailing. At her second IPF World Championships in Helsingborg, Sweden, Webb started to have issues with what she later found out was positional vertigo, meaning she’d experience sudden dizziness due to changes in her head position.

Although it affected her performance, especially during bench presses when she had to lean back, she still managed to deadlift 220.5 pounds and win gold over her opponent.

Since getting diagnosed with vertigo, Webb is on the upswing, and she’s not slowing down. She lifts at least twice a week with a trainer, and she adds in workouts in her basement gym for a total of up to five days per week.

One of her sons has been tracking her progress from the beginning, recording her training and even keeping up a Facebook page with her progress. By his calculation, Webb has lifted more than 3 million pounds total since December 2016. He’s nicknamed Webb “HERcules,” and it definitely fits. She still holds the Raw American Masters 5a deadlift record with an official 259-pound lift.

Working with a trainer changed Webb’s life for the better, and she thinks that everyone, no matter their age, can benefit from infusing their lives with some fitness.

“Even if you start out lifting with a can of corn or something, just get your muscles kind of relaxed. Older people with any ability level can do exercises that will make them feel better, and I highly recommend it. If you get a trainer, take his or her advice, and you will feel so much better.”