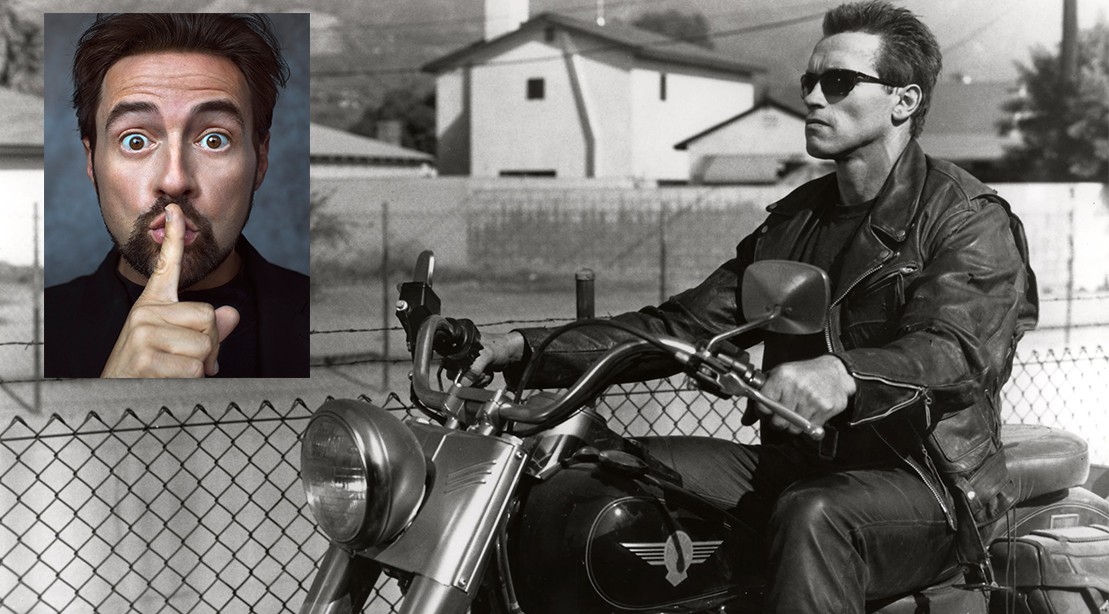 My first viewing of Terminator was on a VHS. My mom wouldn’t let me see it in theaters because it looked too scary. My friends all saw it, talked about it, and said, “Oh my God, you have to see it, man! It’s Arnold!” When I finally did, it was everything everyone promised it would be.

The opening sequence of Arnold popping here though time naked is very striking. The Terminator beats up and kills poor Bill Paxton. He rips his eye out in a bathroom at some point in the movie. All of this burns itself in the imagination of a young teenager.

It is our 80’s sci-fi classic. Stands shoulder-to-shoulder with Alien and Predator. It introduced Arnold as a massive movie star. Look, we loved him in Conan, but that was a sword-and-sorcery epic and in those days, those didn’t gross an earth-shattering amount of money. And neither did Terminator, frankly. That was more of a home video find for a lot of people.

As much as we loved Terminator, T2 was a quantum leap forward with next-level special effects. It was as if someone from the future arrived naked through a time machine and delivered what the future would look like! That was the beginning of the end for practical effects. Nowadays, you would never see a rubber shark in a movie.

A big sell of T2 was that Sarah Connor was JACKED! Linda Hamilton was far more muscular than I had been in my entire life as a young male in New Jersey. We all saw her in other things, but now here she was, this lean, mean, muscle machine who was ready to take on the Terminator himself. You can draw a direct line from her Sarah Connor in T2 to Captain Marvel and to any other female-led action movies. I don’t write Dogma with Bethany (Linda Fiorentino) as the main character without T2.

I’ve only seen the trailer for Dark Fate, but it looks fantastic. It’s a big vote of confidence that Jim Cameron is involved again. But Tim Miller (Deadpool)? He can do no wrong. He’s an absolute genius. I trust him with The Terminator. And I’m a longtime Term fan, I’ve seen every incarnation—including Salvation! (To be fair, T3 was a really fun movie.) But if they’re gonna go from T2 to Dark Fate and forget everything in between? I could co-sign on that. It seemed to work with the Halloween reboot last year.

We’re happy to go back to the theater and see this reunion. Why has Arnold as a robot aged? Or why is he there at all? Because last time we saw him in T2, he was dipped into molten metal. For me, I’m all for it. They get all my nostalgia bucks.

I’ve only crossed paths with Arnold once, in the waning days of his governorship. And it was after I was thrown off Southwest Airlines for being too fat. I made a stink about it on Twitter and whatnot, and it got covered in the news. And then I get a phone call one day, and they were like, “Please hold for the Governor.” It’s an often imitated voice. So I thought I was being pranked, at first. And it was Arnold Schwarzenegger.

He had asked if I wanted to talk at this health convocation and share my story of being thrown off the plane. I was already booked for something else, so I couldn’t. But I said, “Hey Gov! While I have you on the phone…before you get out of office…please…legalize marijuana.” And he said (in his Arnold voice) “I’ll look into it.” That’s my only back-and-forth with Arnold.

There are those of us for whom Arnold will always represent movies. When I was a kid, and they wanted to represent “Hollywood,” they’d put up a picture of Humphrey Bogart or Marilyn Monroe. But for our generation? If we were to put up a Mount Rushmore of Hollywood, Arnold’s face is definitely up there.