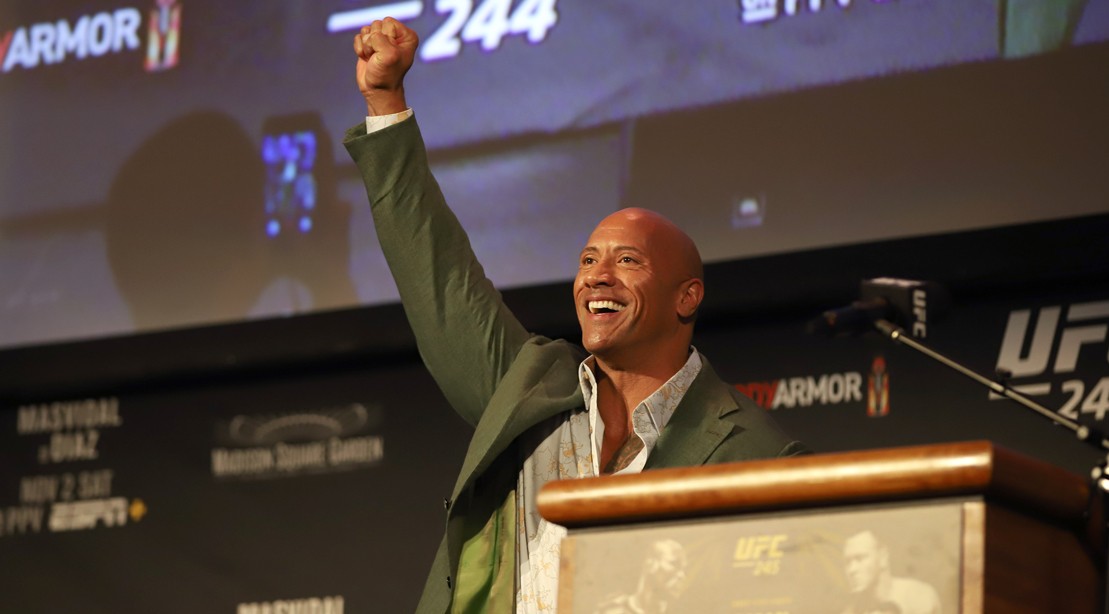 Before Dwayne Johnson placed the UFC’s “BMF” belt on Jorge Masvidal at UFC 244 last Saturday, he took the stage at Friday’s pre-fight weigh-ins to announce an upcoming movie about retired two-time UFC heavyweight tournament winner and PRIDE fighter Mark Kerr, aka The Smashing Machine. Johnson and Dany Garcia’s company Seven Bucks Productions is producing the biopic, and The Rock himself will star in it.

Kerr is retired, but he was as much a pioneer in the sport as he was a controversial athlete who dealt with his fair share of demons over the course of his career. The 2002 HBO documentary The Smashing Machine gave insight into his background, MMA career, struggle with addiction, and tumultuous relationships. Johnson’s upcoming film will be the first scripted take on Kerr’s life story.

Check out the announcement here:

On Monday, Johnson took to Instagram to share his thoughts on the project, which will be his first truly dramatic movie role.

This one has a deep personal connection to me considering the many parallels our lives had. Thank you, @markkerrtsm for trusting me and @sevenbucksprod with your life rights and extraordinary story. This man was once considered the greatest heavyweight MMA fighter in the world. A true pioneering UFC legend. And truly, one of one. Demons of fame, drug addiction, mental health and the pressure to be #1, took over. Like many fighters in the cage or the ring, there’s a deep humanity and depth of character with this man that the world should see. We’ve all hit rock bottom. Some make it back up. Some don’t. Giving this one my all. #MarkKerr #TheSmashingMachine

While the Rock is a longtime MMA fan, he says he has no plans to step into the Octagon himself.

“The most successful part of my Octagon career, I’m sure, would be my entrance music,” he said at the weigh-ins. “That’s where it would end.”

Johnson hasn’t revealed more details about the film, so we’ll just have to wait to find out more. But one thing’s for sure, it’s no the only film Seven Bucks Productions has in the works.

The Rock took to Instagram on Wednesday to share a “very special movie” that Seven Bucks Productions is “honored to make” recounting the story of National Wrestling Hall of Fame wrestler Anthony Robles, who was born with one leg and refused to wear a prosthetic. He overcame countless obstacles to become a three-time All-American and 2011 NCAA National Champion wrestler.

Check out the announcement here:

Very special movie that our @sevenbucksprod is honored to make. @arobles125 was born with one leg and refused to wear a prosthetic so he removed it when he was just three years old. Overcoming impossible (so they said) odds, he goes on to become multi time All American, an NCAA wrestling champion and one of the most inspiring stories sports achievement has ever known. Thank you @ARobles125 for your trust in us to share your incredible journey with the world. Proud of you, brother. Let’s work. #UNSTOPPABLE #TheAnthonyRoblesStory

There isn’t much detail yet, but again, we can’t wait to see how Robles’ story is told on the big screen.