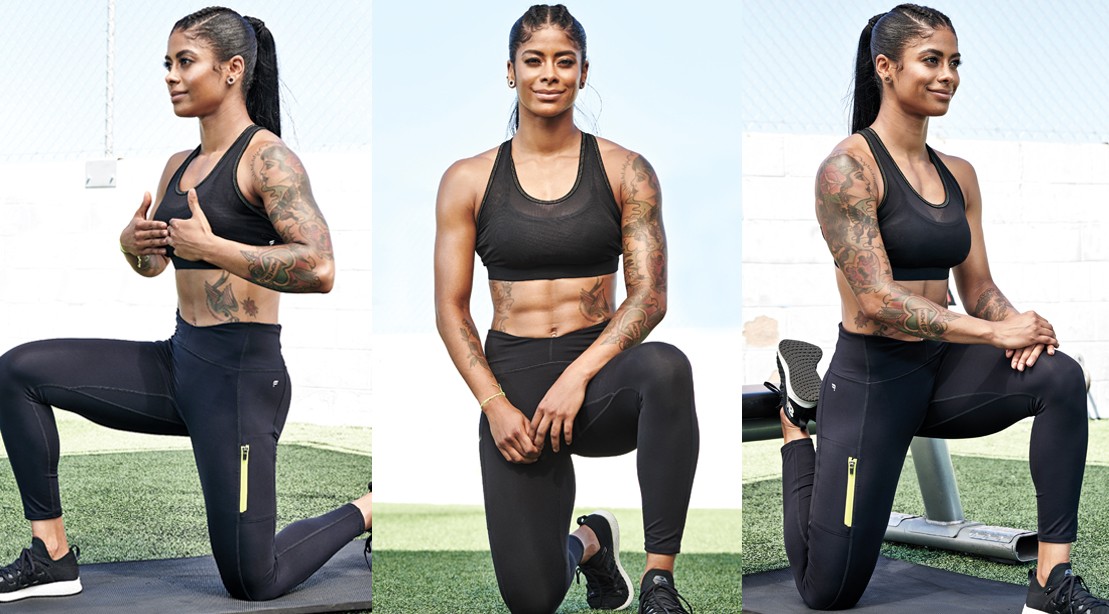 Every body has a story. Massy Arias’ insanely chiseled physique is a  story of strength but also one of perseverance, helping her overcome the odds and become an Instagram- famous fitness guru with millions of followers—2.6 million and counting—including celeb stans SZA and Chris Hemsworth.

Even her tats tell tales. “I have a koi on my right side going upstream, which symbolizes me going through a hard time but still pushing through,” Arias says,  referencing the intricate fish ink next to her sculpted six-pack. “The lady on my shoulder? That’s my mom looking over my heart.”

Formerly known on social media as MankoFit, Arias has built up  an impressive body of work  that includes a CoverGirl  endorsement, a Fabletics  collection, a supplement line, an in-the-works book, and a brand-new fitness app, aptly named Empowered by Massy Arias, that launched in October with a 30-day challenge kickoff. All this before she hit 30. It’s hard to believe, then, that just seven years ago, Arias couldn’t do one pushup.

Born Massiel Indhira Arias in the Dominican Republic, Arias moved to the United States when she was 14. “I’m from the Caribbean, and in the Latino world, boys do boy things, girls do girl things,” she says. “My parents never encouraged me to do sports. I did ballet.” But Arias developed “exercise-induced asthma,” forcing her to hang up her pointe shoes.

Fast-forward to her late teens. “I was living very unhealthy at the time. Partying, drinking, smoking cigarettes; I got caught up in the wrong crowd,” she recalls. The hits kept coming. “My brother got  diagnosed with Burkitt’s lymphoma,” an uncommon but aggressive type of cancer. “I was in an abusive relationship in which I let him devalue me. Once I broke it off with him, I realized, What am I doing with my life?”

Arias was 23—and deeply depressed. “I didn’t even want to shower. I stopped going to nursing school. I was living in my room for eight months straight.” Her gums receded. Her hair fell out. “I lost so much weight, I could see my rib cage,” she says. “My body was literally eating itself.”

She tried just about everything—herbal therapy, cognitive therapy, hypnosis—to battle her depression, to no avail. Every route except one. “Fitness saved my life,” she says. A friend encouraged her to hit the gym. She started with the elliptical, going outside and getting more sun, meeting new people. And then she discovered Jamie Eason’s 12-week program on bodybuilding.com. “She had the same haircut as me, like a bob, and she looked so incredible and strong!” Arias says. “I was obsessed with not being this weak, skinny girl who was run over by a dude—or by life.”

The program was advertised as a beginner’s workout, “but it was totally unrealistic for someone who had absolutely no core strength,” she says. “I couldn’t even lift five-pound dumbbells for three reps!”

Arias viewed it as a challenge, and little by little, she increased her muscular stability. “That first pushup felt great!” Arias shared her progress and her routines on social media.  She never considered parlaying her passion into a career, but when people started asking for training advice, she decided to get certified. Just as Jamie Eason  motivated her, Arias is now paying it forward to millions of women  of all walks—known as MA Warriors—with guided workouts and custom meal plans on her new app. Her training style incorporates resistance training, calisthenics, yoga, and HIIT. Her body-positive message promotes maintaining a healthy balance.

A major milestone that’s made her a better trainer: giving birth to Indira Sarai, her 2-year-old with her equally jacked husband/business partner, Stefan Williams. (Back in September 2016, Arias made headlines for posting a six-pack selfie—at four months pregnant.) “My daughter has made me more empathetic to the people I train,” she says. “I’m not bulletproof, but I do feel myself to be a tough cookie, and I understand that most people won’t be like that. So having this tiny little human that’s so selfless and so  innocent has taught me to be more patient and to continue to see the good in people.

“My mantra has always been: Be your best version and always be progressing.” So Arias is still a work in progress, just like the peacock tattoo on the inside of her arm. “I haven’t finished that one yet because it hurts a lot,” she says with an infectious laugh. “But that one reminds me how beautiful and powerful I am.”