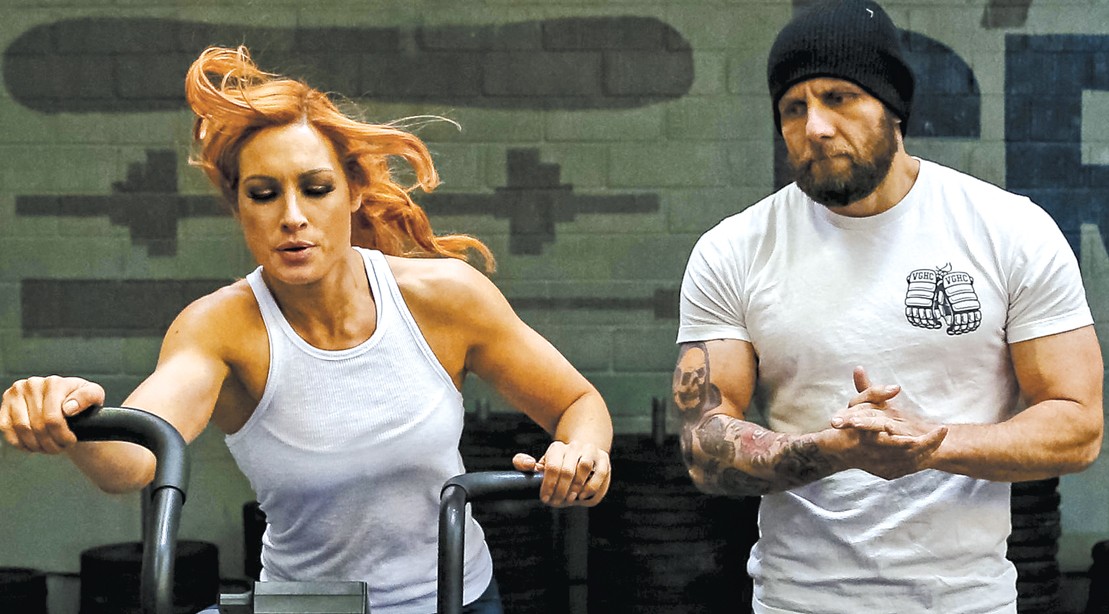 Josh Gallegos is the go-to trainer for the WWE’s elite personalities, but if you ask him how he got to be where he is, he’ll say it was because he was at the right place at the right time.

“I’ve kind of Mr. Magoo’d my way into these really fun opportunities,” Gallegos says. “All the movies and TV shows that I’ve worked on, from Spider-Man to The Longest Yard with Adam Sandler to my job with the game show Jeopardy, they’ve all kind of happened in these weird, fun circumstances. And the Seth Rollins thing was one of them.”

The Seth Rollins thing is a close partnership that the two formed after Gallegos began training the former WWE Universal Champion a few years ago, utilizing CrossFit-style WODs. That relationship led to Gallegos coaching other big-name WWE athletes—Becky Lynch, Cesaro, Bayley, and the Singh Brothers—all on recommendation from Rollins.

Soon after, Gallegos, a CrossFit Level 2 trainer and CrossFit Endurance Coach, and Rollins formed a company called DeadBoys Fitness, which offers a “functional training experience” that includes working out with WWE personalities in a fun and inclusive atmosphere.

“We founded DeadBoys to get people into fitness because that’s really important to Seth and me,” Gallegos says. “It’s kind of a way to trick them into changing their lifestyle.”

#Repost @deadboysfitness ・・・ 201 DeadBoys and DeadGirls in 2 weeks! That’s insane! Thank you so much for taking that leap and joining us in this fitness journey. We have built a solid community and can’t wait to see it grow. If you haven’t yet not too late to join. You’re fitness is ABOUT TO PICK UP! #DeadBoysFitness

Gallegos had his own life-changing experience when he tried CrossFit for the first time. For years, he trained using body-part workouts, but he kept hitting plateaus. Then he saw the new, ripped physique of an old friend, who told him that CrossFit was to thank, so Gallegos gave a class a try.

“After my first class, I was hooked,” he says. Soon after, Gallegos became a fixture in L.A.’s top CrossFit boxes and well-known in the local fitness community.

While working an event at Sony Studios, Gallegos took over the mic and displayed a natural ability for MCing. The owner of the box he was working at hired him on the spot to host a regional CrossFit event. This eventually led to him becoming one of the hosts of the annual CrossFit Games. Now he’s the host of the CrossFit Games.

Right place, right time. But none of the timing would’ve mattered if Gallegos hadn’t had the talent and personality to make the most of it. Which is why he tries to bring a fun-loving attitude to everything he does, an attribute that is evident in the DeadBoys programs that he conducts for participants.

“It’s not just your typical fitness program. It goes beyond that. It tries to inject a little bit of pop culture, some comic book references and movie references. I try my best to get on their level so they are stoked to wake up to see what the workout is every day.”

WOD IT UP: WHEN THE MAN COMES AROUND

This WOD (workout of the day) is one of Josh Gallegos’ favorites. Named after the famous Johnny Cash song, this workout won’t turn you into the Man in Black, but your muscles will feel like they’ve been through a ring of fire after performing this brutal sequence.

HOW TO DO IT

For this workout, you’ll perform dumbbell snatches and burpees back-to-back in a 1-minute-on, 1-minute-off fashion.

As for reps, you’ll start by performing 4 of each move, resting for the remainder of the working minute, and then taking your full minute of rest.

Then you’ll repeat but with 2 additional reps, so 6 snatches and 6 burpees.

Keep adding 2 reps until you can’t complete all reps in the working minute.